Today I'm sharing the story of another interesting collectible...
Frozen Charlottes.
Ever heard of these little dolls or seen them popping up everywhere
including as charms for jewelry or as popular collectibles?

Frozen Charlottes are a particular style of porcelain doll made from
1850-1920.
They are unjointed dolls and are considered "frozen" in place.
They range in size from under 1" to 18".
The 1" sized dolls were also known as "penny dolls" since they sold for one cent each. Children often collected these dolls due to their low cost. 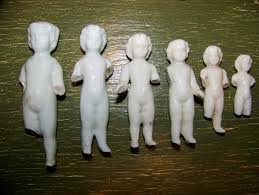 The original poem by Sebra Smith, called "Young Charlotte" was written after reading an article in the "New York Observer" on
Feb 8, 1840 that stated "A young woman...was frozen to death...
while riding to a ball on Jan 1, 1840. 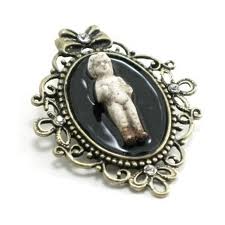 The poem then inspired the American Folk Ballad
by William Lorenzo Carter "Fair Charlotte".
The ballad tells the tale of a beautiful young woman and her
beau Charles who travel 15 miles by sleigh on a bitterly cold night to attend a ball.
Her mother warned her to wrap up in a blanket to keep warm, but sadly Charlotte did not listen. She wanted to be seen looking beautiful in her gown for the ball, a blanket wouldn't allow that and would wrinkle her gown.

oh i SOOOOOO love this post! it holds so much charm and sweet history! this doll is so popular in the cottage world and have become a huge collectible and a basic foundation for many altered art creations! thank you for sharing this with me! the cool thing is i don't even have to take notes with this history lesson -- i can just click and look and read any time! thank you for taking the time for us -- it is greatly appreciated!!! hugs!

thank you very much for the interesting lesson! I've often wondered why these ladies are called frozen Charlottes. Now I know. Mona

love that story!!! Very interesting lesson, I think I have one or two of these doll put up somewhere.
They were either my Moms or my MIL's.
TFS!!